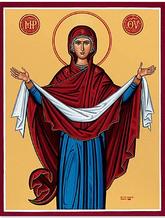 Saint Demetrios was born in Thesaloniki, Greece in 270 AD. He came from a wealthy family and because he was athletic in appearance and heroic in spirit, he became a high-ranking officer in the Roman Army at a very young age. (This is why he is depicted in Byzantine icons in military dress, either standing or riding a horse.) He considered himself a soldier of Christ first, and a military soldier second.
He spent most of his time as a devout missionary, preaching the Gospel at secret meetings and converting pagans to the Christian faith. At one of these meetings, he was captured and placed in front of the Emperor Maximian, who wanted to learn the truth about the conversions. Saint Demetrios proclaimed his faith by saying: "...only in Christ do I believe." With that proclamation, Maximian ordered that Saint Demetrios be sent to prison and subjected to the cruelest tortures. Even though Saint Demetrios was imprisoned, he did not stop preaching the gospel to those who came to see him. In jail, he was visited by his follower, Nestoras. Nestorius was a man of small stature and had come to ask for his beloved teacher's blessing to fight in the upcoming gladiator games. The emperor had decided to use the games as a duel between Christianity and paganism by challenging any Christian to a fight against the athletic giant, Leo. With the blessing of Saint Demetrios, Nestoras fought and killed Leo. Enraged at the loss of his favorite gladiator, the emperor commanded that Nestoras be beheaded on the spot. Recognizing that Saint Demetrios was the inspiring power behind Nestoras, the emperor ordered that Saint Demetrios be executed by spear.
On October 26, 306 AD Christians buried the body of Saint Demetrios at the place of his execution and because of the beautiful scent that emanated from his tomb, he was named Mirovlitisor "The Myrrh Gusher". The most ancient icons of Saint Demetrios may be found in his temple in Thessaloniki where he is the patron saint. This is not just because he was born and died there, but because the people believe it was his intervention that saved the city during many attacks by Slavic nations, the Bulgarians, Arabs, Saracens and others. Even the liberation of Thessaloniki during the Balkan wars of 1912 coincide with the feast day of Saint Demetrios on October 26th.
In ancient times, the life of Saint Demetrios was commemorated with celebrations that lasted for months. These celebrations where accompanied by many events such as the famous market named "Demetria". Traders and business people from Europe, Egypt, Arabia and Libya came to deal and trade. The festivities were also attended by philosophers, learned men of the time and artists. To this day, Thessaloniki hosts Greece's largest international trade exhibition each year.
View on Mobile