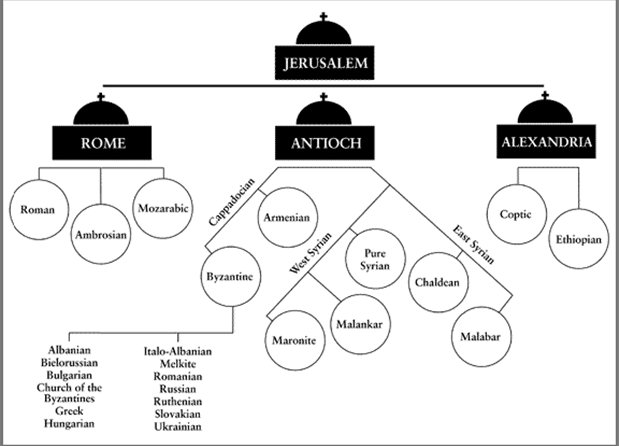 This chart shows the various Catholic liturgical families (rites) and their ancestry. Jerusalem, the place of the founding of the Catholic Church, came first in time. Then three major branches eventually formed within the Church: Roman, Antiochian and Alexandrian. The Ukrainian Catholic Church is part of the Antiochian branch, specifically coming under the Byzantine rite. The Catechism, quoting from Sacrosanctum Concilium, the Second Vatican Council's Constitution on Divine Liturgy, states: "The liturgical traditions or rites presently in use in the Church are the Latin . . . and the Byzantine, Alexandrian or Coptic, Syriac, Armenian, Maronite and Chaldean rites. In 'faithful obedience to tradition, the sacred Council declares that Holy Mother Church holds all lawfully recognized rites to be of equal right and dignity, and that she wishes to preserve them in the future and to foster them in every way.'" (CCC 1203).